Come and discover an unusual place in a Mythological trip in the heart of the Pharaohs under Egyptian antiquity.

The pyramid was installed on the idea of relocation:

The pyramid is based on the four elements. Corridors and rooms dig the quintessence. In his heart, soul and conscience, the transgalactic black hole. The tip is the celestial fontanel.

The course
Summer 2004, after studying the Egyptian burials in Cairo and in the Valley of the Kings, an internal need pushed me to want to install a Pyramidal Place in Cormatin. The first work was to install the actual dimensions in the Bataillard meadow in Cormatin.

Access to the territory was essential, connecting strong points like Fragne, Mont ST Romain, St Hyppolite, Uxelles and Brancion via the Bergerie alias Khéops, by the trace with plaster, or with text and video. All of this work falls between Grosne and Guye confluence.

In 2007, the purchase of the Bergerie (La Bergerie du bas) named Khéops on a plot of 4000 m2, I decide to work on the 1/5 of the dimensions of the Pyramid of Khéops. The golden ratio is needed it is the foundation of construction, (unit of measure approximately 1.6180339887). The Pyramidal wall is implanted then built, set up first Horus. Other sculptural pieces are emerging as the project progresses.

This project related to the stars allows visitors to live a unique place, to walk in a sculptural path.

Step walls, watered with memories, echo these pharaohs without territories. The establishment of seven pieces, is wearing a bronze finish on a red background.

Sirius Eye
In the pyramid fits, a Sirius eye (also called alpha Canis Majoris by the designation of Bayer) main star of the constellation of the big dog. And invites, the look in successive memories, where the experience is played and is foiled layers and undercoats and refers at every moment to the readers the questioning of readability. This place invites you to wander to the rhythm of time, in a sculptural path. I worked both on my own eye, and that of this star. 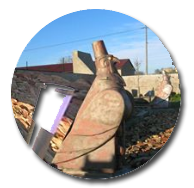 Since 2007 every day I work for the continuity of this relocation project.
Enjoy the visit !
Gérard Larive artistic designer and creator